Imagine if all your friends had their birthday in the same month. If you are a coral polyp born last year, you will find that most of your friends have their birthdays in late November, with a few in October and December. The predicted Great Barrier Reef coral spawn dates for 2022 are 11 to 15 November for inner reefs, and 11 to 15 December for outer reefs, although some corals spawn earlier or later.  It happens after the full moon and a rise in water temperature to 26 degrees for a month before spawning.

Truth or clickbait? Is the Great Barrier Reef Dying?

Below: An Acropora coral releases an egg alongside the Sunlover Moore Reef Marine Base, 54km off Cairns, on the Great Barrier Reef. Image: Gabriel Guzman, Calypso Reef Imagery. 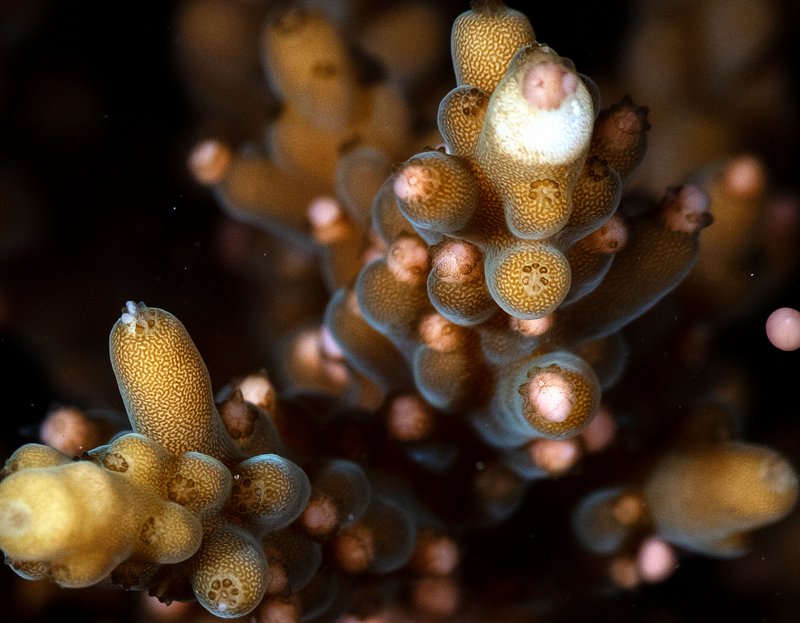 Soft corals on Moore Reef began releasing eggs and sperm last year on November 16. Marine biologists Pablo Cogollos from Sunlover Reef Cruises, Stuart Ireland from Calypso Productions, Gareth Phillips from Reef Teach, and Jennie Gilbert, who is co-founder of the Cairns Turtle Rehabilitation Centre, were based on the Sunlover Moore Reef Marine Base, 54 kilometres off the Cairns coastline. They captured photos and video of the night-time coral spawning.

Mr Cogollos said the spawning behaviour mirrored previous years, with soft corals spawning first, and it was even more prolific. “There were three times the volume of eggs and sperm compared to last year when the soft corals spawned four nights after the full moon, and it was deemed the best coral spawn in five years,” he said. “The most abundant soft coral to spawn was the Flexible Leather coral (Sinularia flexibilis), also the Finger Leather (Sinularia polydactyla) and Acropora Sp. The abundance of spawn seen indicates that the reef is renewing.”

Moore Reef was ideal, said Mr Cogollos, because it had a great variety of corals alongside the pontoon. The pontoon was used as a base to change diving equipment and light the Reef, which provides good footage each year. 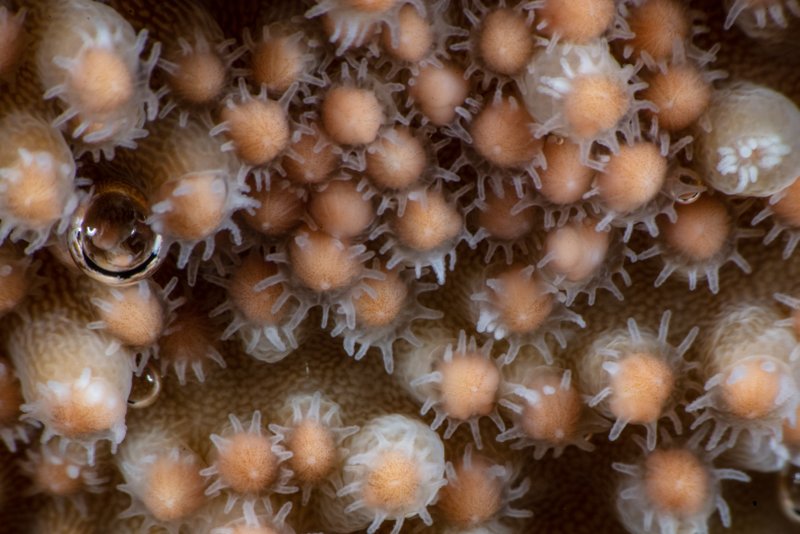 Eggs being released by coral at the Sunlover Moore Reef Marine Base on the Great Barrier Reef. Image: Gabriel Guzman Calypso Reef Imagery

Every year is different, and seeing the coral spawn can be tricky as different reefs go off at different times, so it is easy to be in the wrong place at the wrong time. The coral spawns on the outer Great Barrier Reef around two to six nights after the full moon in November when the water is 27- 28C, which it has been for the past month. The corals release eggs and sperm around the same time to ensure a better chance of fertilisation. Looking at the tide chart four to six nights after the full moon, you will see little water movement between the high and low tides. During this time, coral spawn rises slowly to the surface where fertilisation begins, and coral larva called planula is developed. The planula floats around in the water for several days before settling on the ocean floor, where it buds and starts a new coral colony. Most reef fish are sleeping during spawning, hence the eggs are not preyed upon. However, if there is a slick of spawn left in the morning, then it is a feeding frenzy for these smaller fish.

Mr Ireland said he enjoys filming the coral spawning every year as it gives him hope for the Great Barrier Reef. “Despite the past bleaching events, the fact we are seeing corals spawning means the ecosystem’s functionality is working, and while we see this, along with recruitment and regeneration, we can all have some hope about the Reef’s future. “While we should all have hope that the Reef’s in-built resilience will prevail, the one thing I do stress is that as humans, we need to minimise our impacts on the Reef so it can continue its natural cycles.” 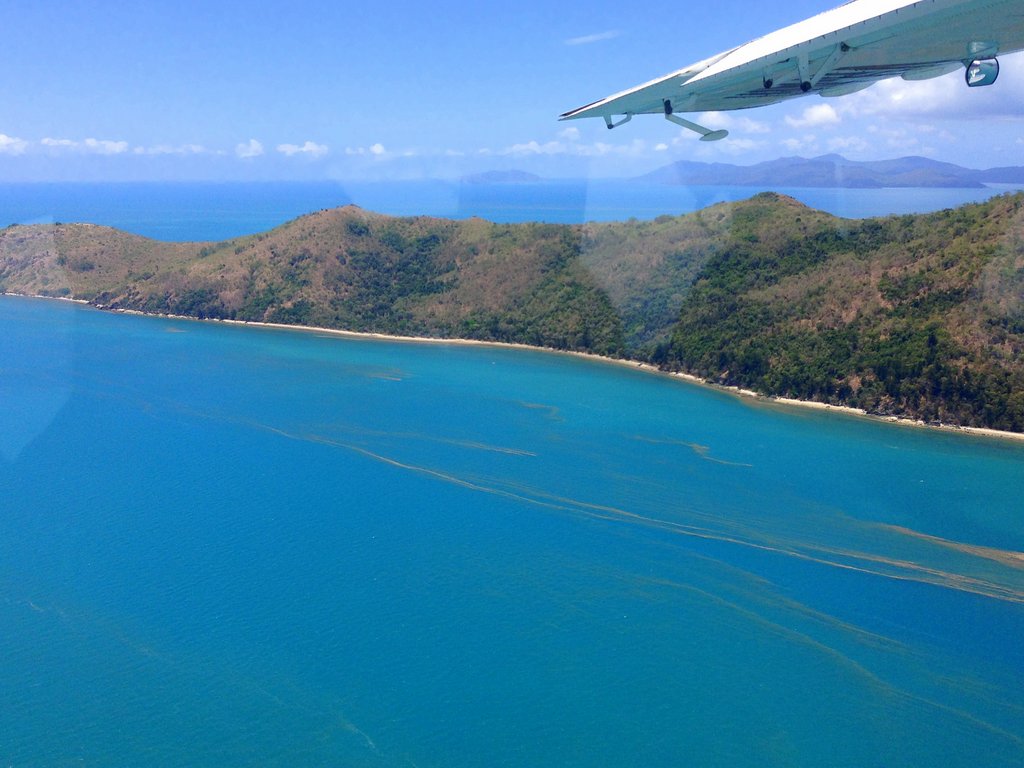 Seen from the air on an Air Whitsunday flight over the Whitsunday Islands the coral spawn looks like ribbons in the water. Photo: Kerry Heaney

Corals grown in Australia’s first offshore coral nursery at Fitzroy Island off Cairns spawned for the first time this year after being planted on the Great Barrier Reef four years ago. Thousands of tiny pink bundles of eggs and sperm have erupted from branching acropora corals planted in Welcome Bay to the team’s delight at the not-for-profit Reef Restoration Foundation.

Reef Restoration Foundation Chief Executive Officer Ryan Donnelly said a coral farming expert and three marine biologists recorded the event at the inshore reef, which signalled the start of coral spawning on the Great Barrier Reef, with the outer reef expected to reproduce next month after the full moon. Marine biologist and Master Reef Guide Azri Saparwan, who helped to plant the corals in 2018, emerged from the water with the glow of a proud parent.The corals were grown on underwater frames after the Great Barrier Reef Marine Park Authority granted a permit for a pilot research offshore nursery at Fitzroy Island in 2017.

“We planted coral cuttings in a degraded patch of reef, and these pioneer species have grown to around 1m in diameter, helping to create a healthy and complex habitat for various corals and marine life,” Mr Saparwan said.“Watching our coral babies reproduce for the first time to create the next generation of corals was a beautiful and humbling experience. The spawning showcased how the Great Barrier Reef generates new coral recruits each year as part of its regeneration process.”

Cameron Bee, who has 25 year’s experience in coral aquaculture, creating coral farms around the Asia-Pacific region and is part of the Great Barrier Reef Legacy’s Living Coral Biobank project to preserve coral diversity, was part of the team hoping to record the coral spawning.

“We are facilitating reef recovery in a time when disturbances are more frequent and severe. Growing corals to create habitat is important but additionally, taking them through to spawning is a milestone in our bid to maintain biodiversity,” he said.

“It is a community effort as we receive no government funding and rely on the support of around 50 volunteers, with about one-third of these experienced divers working in the tourism industry,” he said.“Cuttings at this site were taken from healthy corals and attached to ‘coral tree’ frames suspended underwater using techniques pioneered at reef restoration sites in Florida. These cuttings grow faster in the nursery setting, allowing us to plant them onto a hard substrate after about six months. As these cuttings establish themselves, other coral species also become established, and marine life, including invertebrates, colourful tropical fish, and turtles, become part of the habitat. Coral spawning is our second goal after achieving a complex habitat as it means the reef is regenerating as nature intended.

“Successful coral spawning will mark a critical threshold for Reef Restoration Foundation, a start-up organisation building partnerships and supporters from nothing five short years ago. The challenge for the Great Barrier Reef is far from over, with scientists telling us the water will continue to warm, but we are up for the fight. In a changing climate, it is all about buying time and selling hope. We need to reduce global emissions drastically but, at the same time, work collaboratively to build the resilience of the places we love. We all have a role to play.”

How long does the Great Barrier Reef coral spawn last?

The annual Great Barrier Reef coral spawn lasts between a few days and a week as different species release their eggs and sperm on different days. This prevents hybrids from being produced.  Coral is smarter than we think! The result is the replacement of coral on thousands of reefs throughout the Great Barrier Reef. Some people laughingly call it the biggest sex show on earth – cue Barry White! 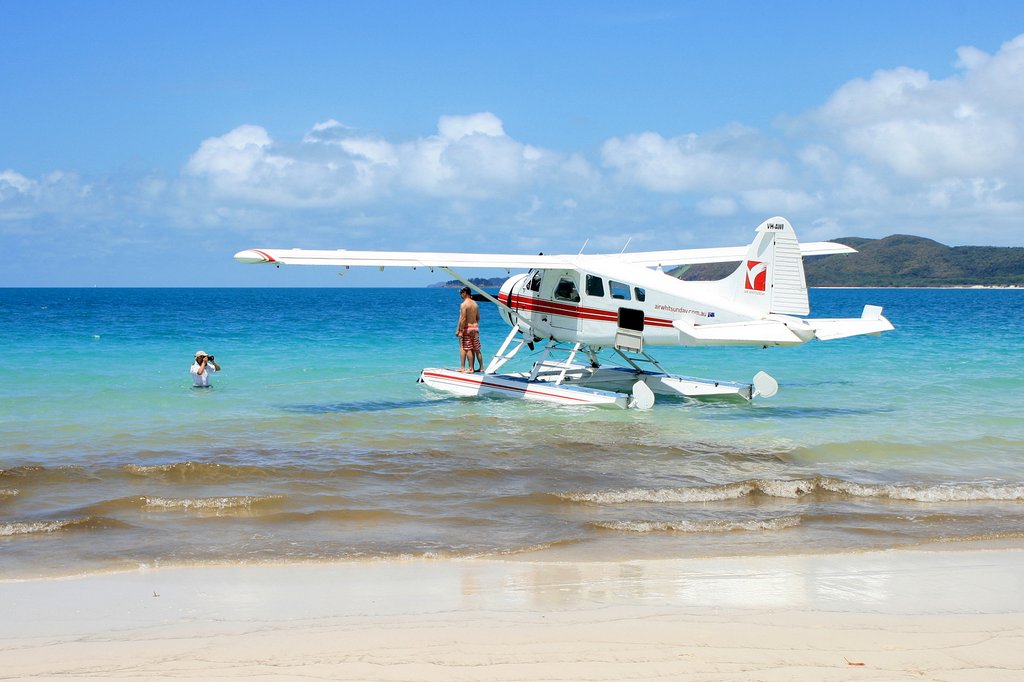 See coral spawning from the air

It is a pretty spectacular display of nature, especially when viewed from the air.  I flew with Air Whitsunday on a Reef Panorama day flight to the outer reef and saw the Whitsunday coral spawn as threads making patterns in the water. On the ground at Whitehaven Beach, the ordinarily pristine white sand and clear blue water were filled with a brown sludge which was the coral spawn.  It didn’t smell or mark our swimming togs as we waded through to get to the beach. 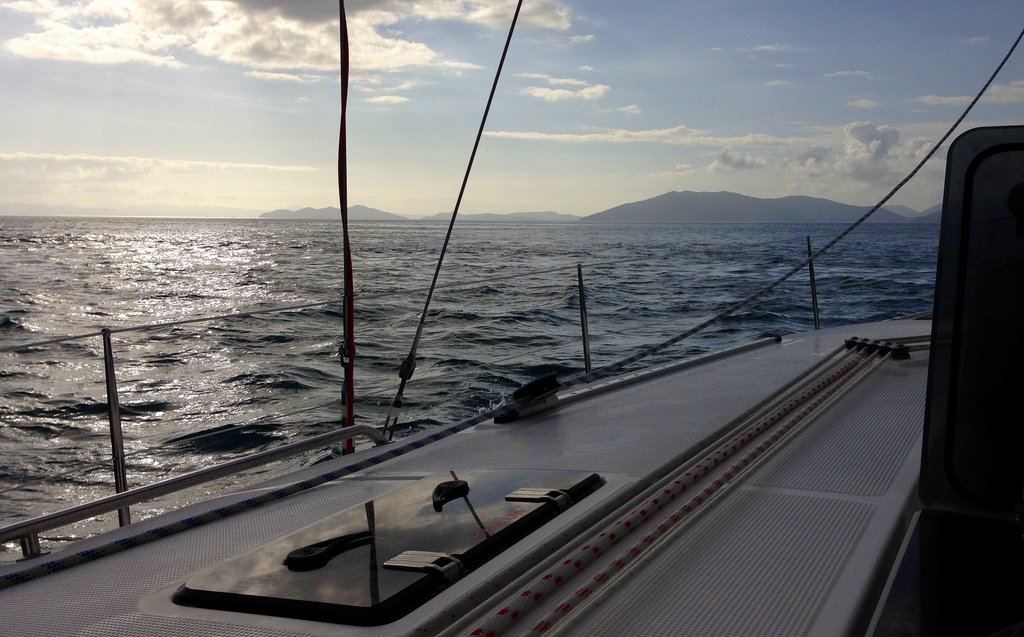 The Whitsunday Rent A Yacht was surrounded by coral spawn glowing in the water. Photo:  Kerry Heaney

When to see coral spawning

The best time to see the spawning in action is for the first three hours after sunset. Each year the coral spawning date will be a little different depending on the location of the reef and the temperature of the water.  If you want to see this amazing event in action, chat with local dive and boating companies because they will know when it is expected. I saw the coral spawn off the coast of Airlie Beach and around the Whitsunday Islands. You can also see the coral spawning on some Barrier Reef islands like Lady Elliot.

The Great Barrier Reef Drive from Cairns to Cape Tribulation is a great way to see the reef from the land.

Disclaimer: Ed+bK travelled as a guest of Tourism and Events Queensland. 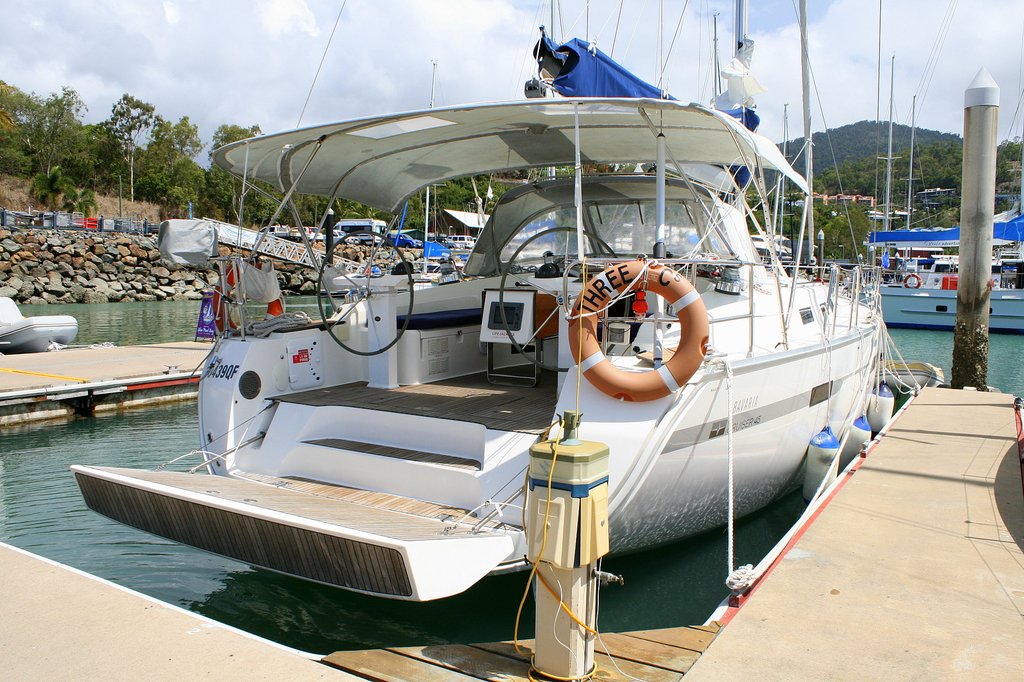 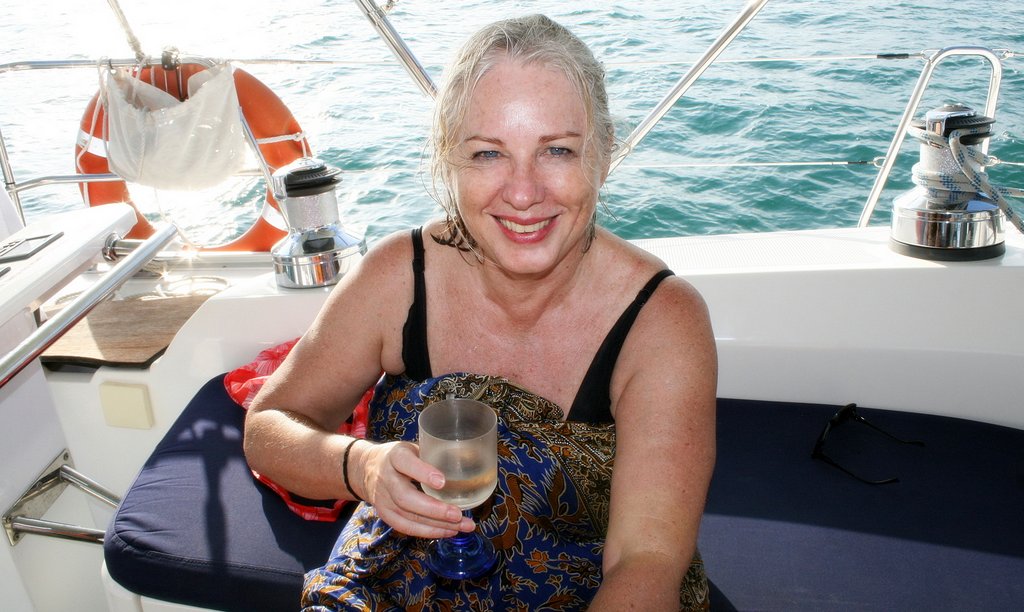 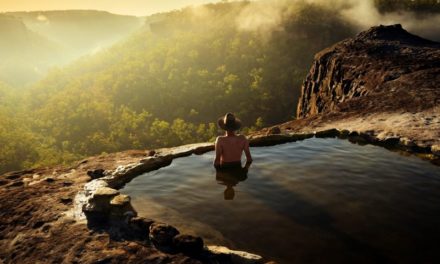 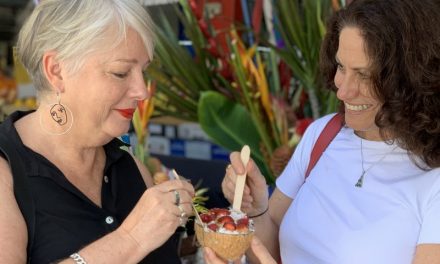 The cheapest way to taste the tropics at Rusty’s Markets 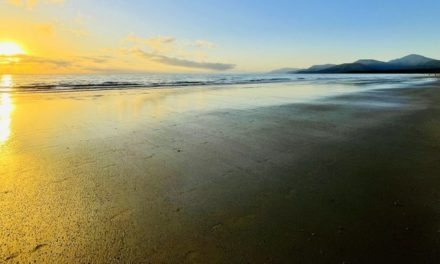