10 top things to do on Stradbroke Island

Call it Straddie or Minjerribah, but do discover the many things to do on  Stradbroke Island which is just an hour’s drive from Brisbane. It’s a real island experience for visitors, with great local seafood and wonderful beaches to explore.

Things to do on Stradbroke Island

The trip from the mainland to the island departs from Cleveland and takes 45 minutes by the Stradbroke Ferries car barge. but it’s more of a journey into a different realm where it’s hard to work up the energy to get stressed about anything. If you need to get there quicker, it takes 25 minutes by fast water taxi.  When you arrive, use this ultimate Stradbroke Island road trip as your island guide.

When there’s plenty of beaches to roam, friendly folk to chat with, incredible vistas around every corner and comfortable accommodation and food, life seems pretty sweet. One Straddie devotee takes all his out-of-town visitors to Straddie because it showcases the region in just a day with wildlife (dolphins, kangaroos and whales in season), white sand beaches and water activities. Now we can add local art to the mix with the Minjerribah Arts Trail.

Apart from swimming at any of the beaches, here are my top 10 things to do on Straddie. What are yours? Please leave your Straddie tips in the comments section at the end.

Enjoy the food at Straddie Brewery. 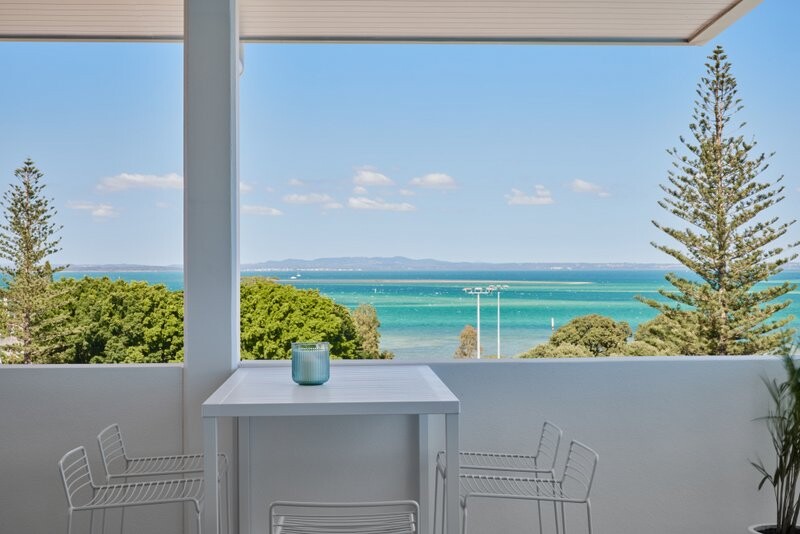 From Thursday to Monday, you can sample a beer at the newly opened Straddie Brewing Co.  You’ll see the new three-story building on the right in Junner Street when you drive off the barge. They have 12 draft taps and a selected range of wine and spirits.  The menu in the 90-seat taproom includes locally sourced produce, including Straddie rocky oysters and the catch of the day, and your favourite pizzas and tapas.  They have plans to offer tours of the brewery, so keep a lookout for those.  The top floor is where you’ll find another 90 seats with panoramic views from the roof deck.  You can even see the Glasshouse Mountains on a clear day! 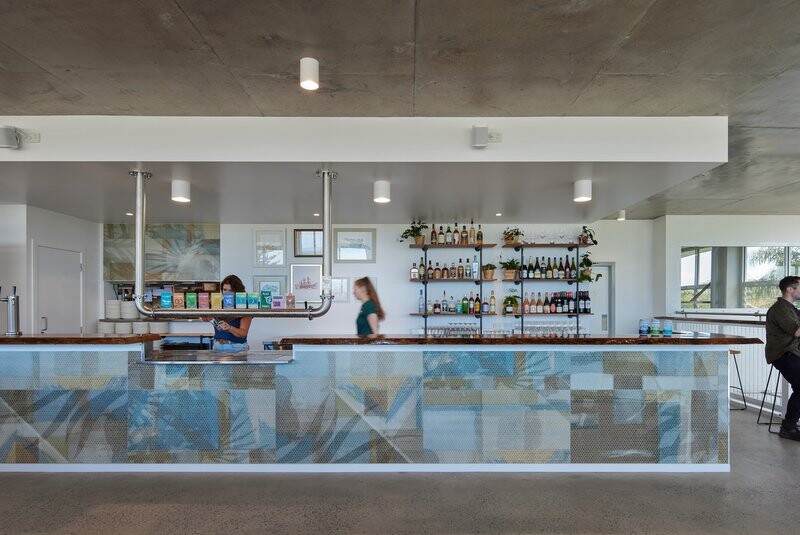 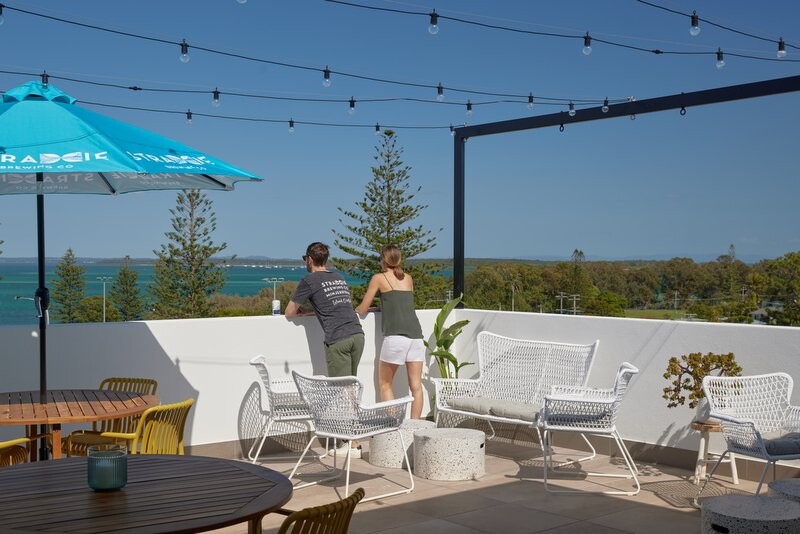 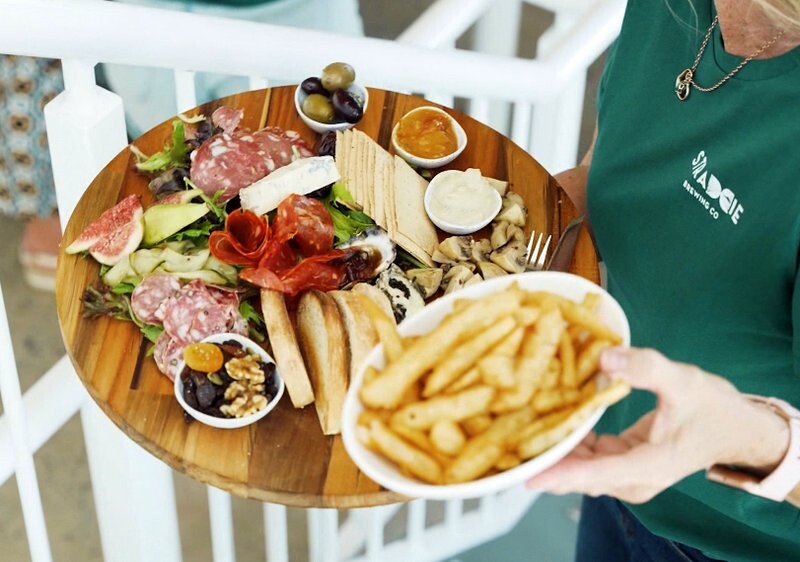 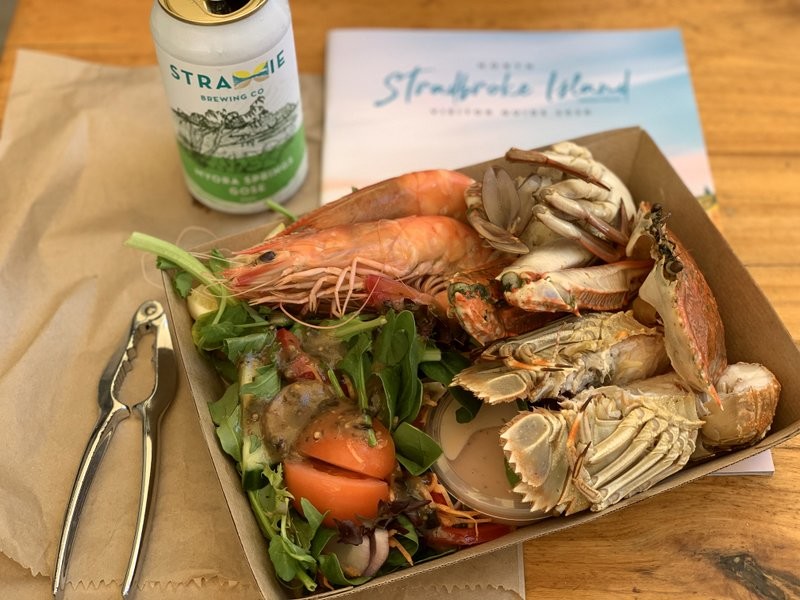 CJ’s Cafe and Pizza, which is located on Ballow Street, Dunwich is a great coffee stop. You can get a coffee on the barge, but I prefer just to enjoy the water views and wait for land. Plus, CJs have these amazing croissants and bagels. Their pizzas also come highly recommended by locals. The cafe opens at 7 am for coffee.  If you feel like a pie, the shop next door sells their homemade versions.

Sam and Helen at CJ’s Pizza will tell you the pastries are very good, and they are right. Photo: Kerry Heaney 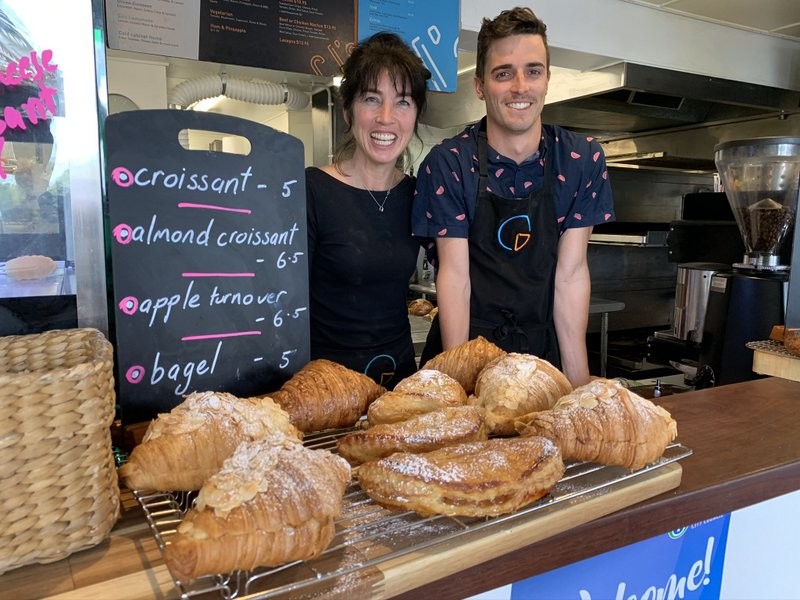 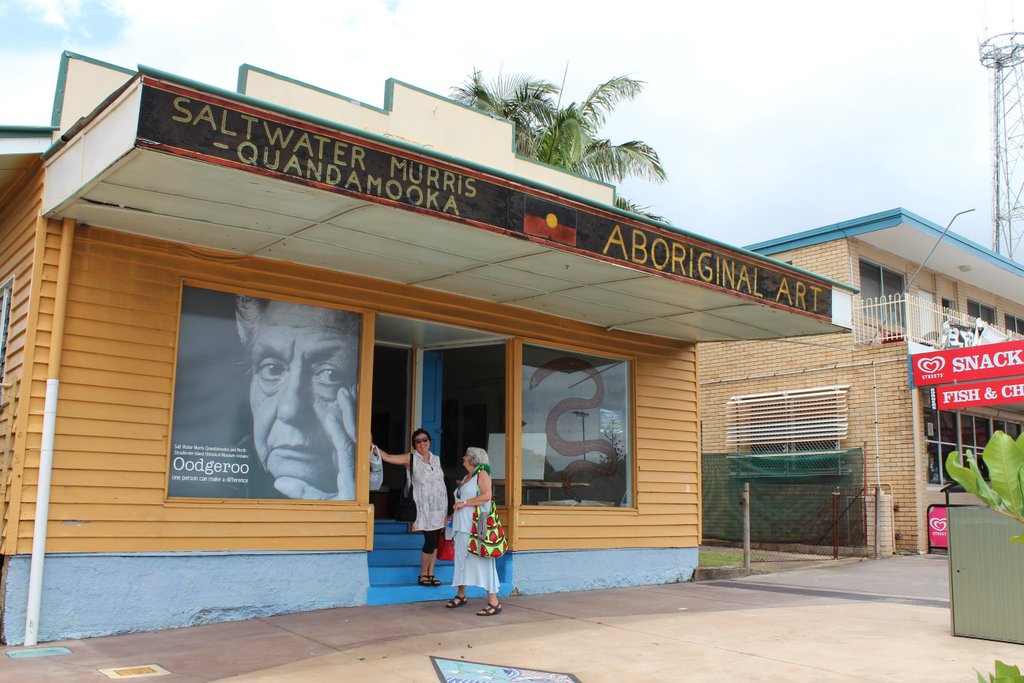 While in Dunwich, check out the local Aboriginal art at Salt Water Murris Quandamooka Art Gallery. There are some beautiful works by local artists inside.

Another place worth checking out is Cockatoo-Collins Studio, where Delvene Cockatoo-Collins creates some wonderful textiles, ceramics and jewellery.  She uses a lot of found objects and captures the essence of Stradbroke Island in her works. 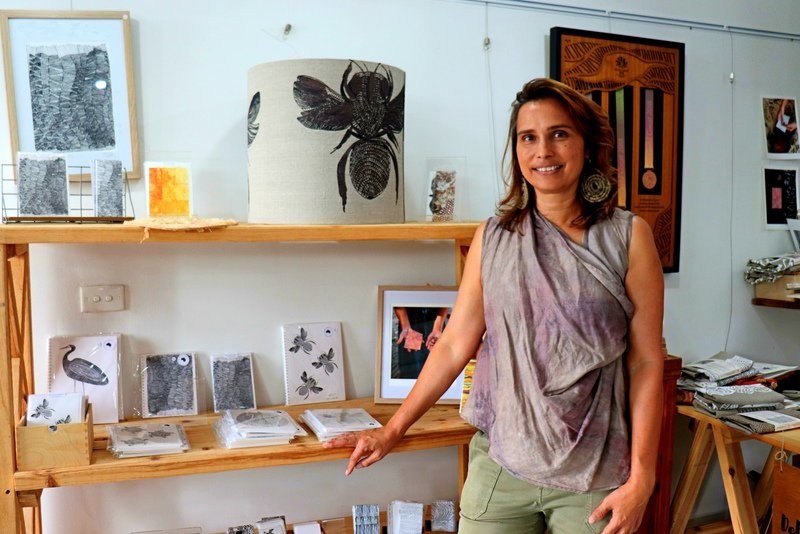 North Stradbroke Island Historical Museum, also in Dunwich, is a wonderful browse and a chance to learn about the island’s history as an asylum. I can recommend 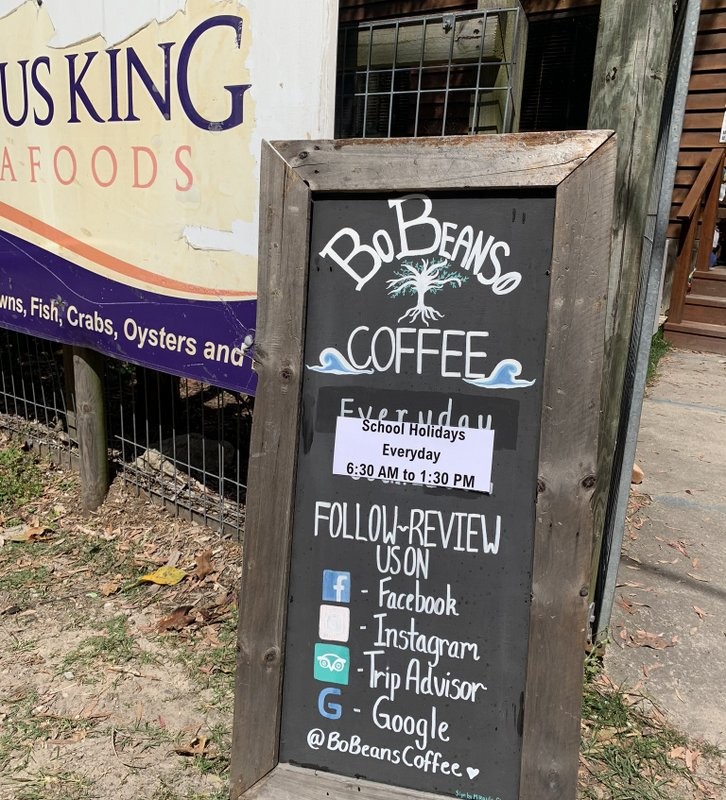 We bought takeaways and enjoyed them on the Amity Point picnic tables. Photo: Kerry Heaney

Amity Point on Stradbroke’s northwestern tip is a small seaside village. You’ll find great local seafood to eat overlooking the jetty or to take home and cook later.  I found oysters at Rufus King Seafoods, which is also home to Bo Beans Coffee.  Check on Facebook to find the opening days and hours for these venues as they change on weekends and school holidays.

Stradbroke Island also is an oyster growing centre, and oysters were an important part of the diet of the coastal Aborigines who lived here. It’s hard to believe today, but for the early settlers, the value of oysters lay in their shells which were converted to lime for building construction.

The Moreton Bay Oyster company was formed in 1874 and operated until disease depleted the oyster backs in 1956.

Sealevel 21 in Ballow Street, Amity is a relaxed restaurant and bar open from Wednesday to Sunday. They also have a takeaway menu. 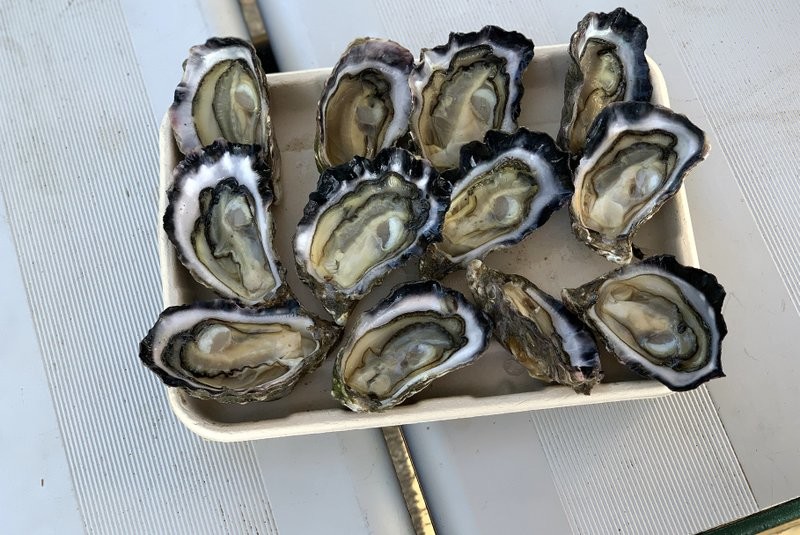 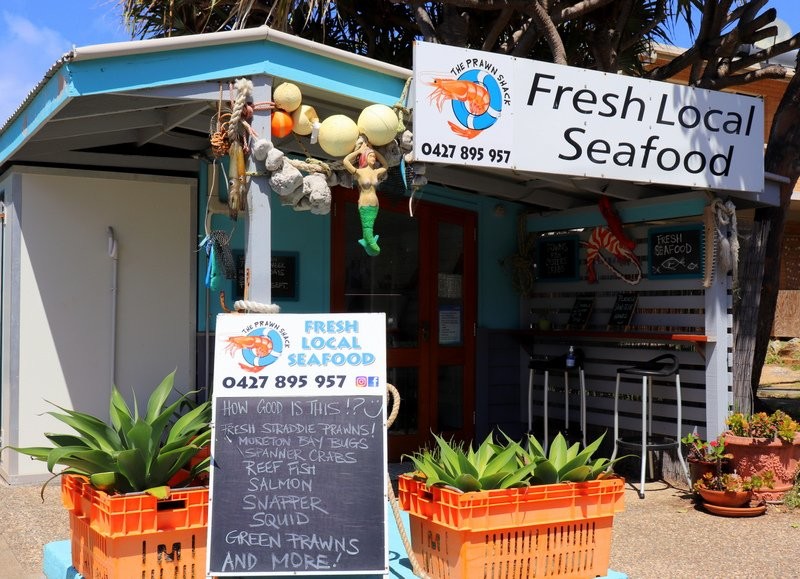 A sunset drink at Point Lookout’s The Point Bar

Enjoy a sunset drink at The Point Bar, Point Lookout Surf Lifesaving Club, Kennedy Drive, overlooking Main Beach, Point Lookout. Open on Saturday and Sunday afternoons from 2 pm, it is a perfect place to kick back and relax. 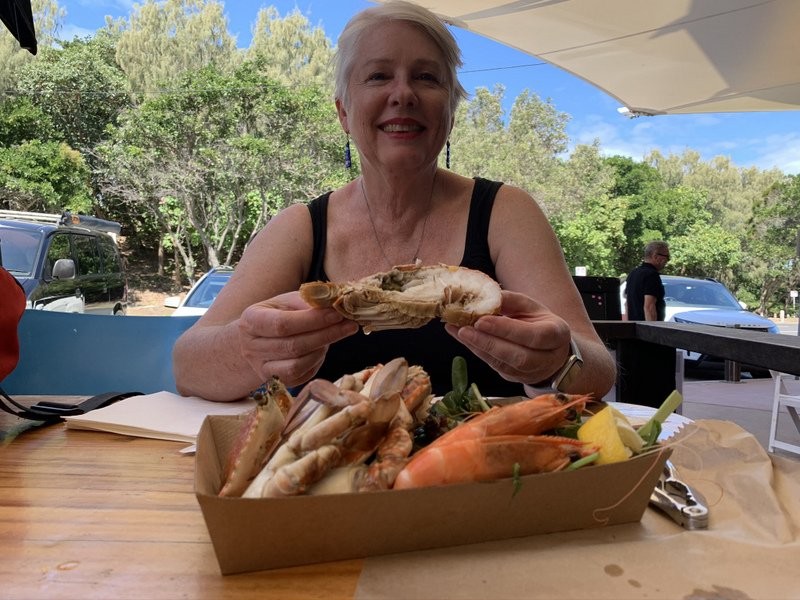 Kerry Heaney enjoyed half of this $40 seafood platter at Point Lookout.

Night dining options on Straddie tend to open up during school holidays and weekends and close during quiet periods. One of the places to eat at night on the island is the Stradbroke Island Bowls Club.  They have an extensive menu and the club is open most nights.

One place you can always be sure to get a meal is the Stradbroke Island Beach Hotel which locals call the pub.  Their bistro is open for breakfast, lunch and dinner daily.

I had a good seafood platter for $40 that I shared with a friend over a local Straddie Brewing Co beer, at Fishes at the Point.  A cone or cup from the gelato shop around the corner is a great finish to the meal. 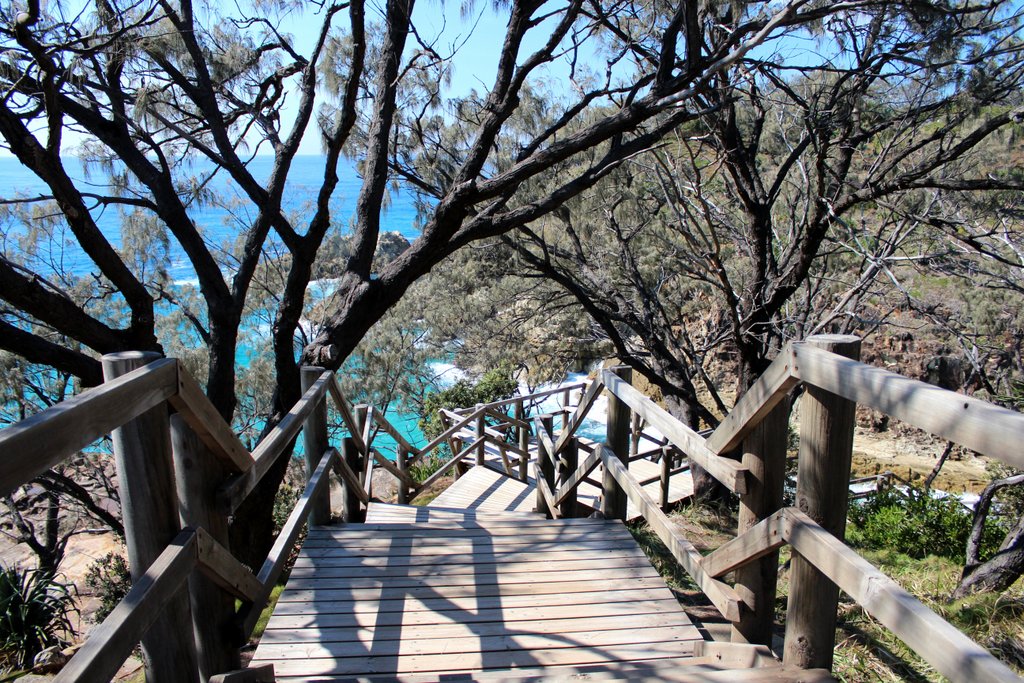 Make sure you do the Point Lookout Gorge Walk, which begins just opposite the shops. The path is well defined boardwalk most of the way but does include some steps.  The views are truly spectacular and it’s a photographers dream. 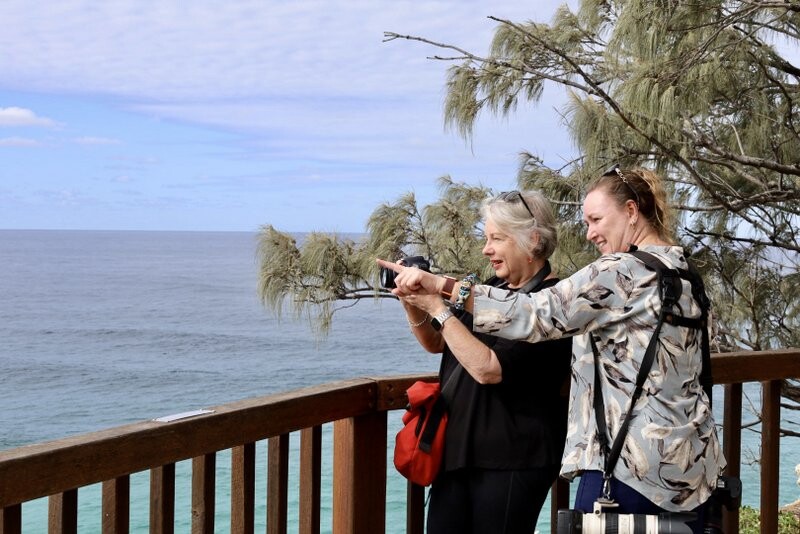 Do a guided photography walk

Stradbroke Island is a remarkable place, but it’s even more astounding when you see it through a camera lens as directed by local photographer Julie Sisco.  Julie runs photograph walks around the Gorge which show budding and developing photographers how to get the most out of the scenery.  She teaches her trade with a charming manner that makes it all seem so easy and you’ll come home inspired to get more out of each shot.  It doesn’t matter if you use an iPhone or a camera with fancy pants lenses, Julie has the right tips for both in her photography workshops. 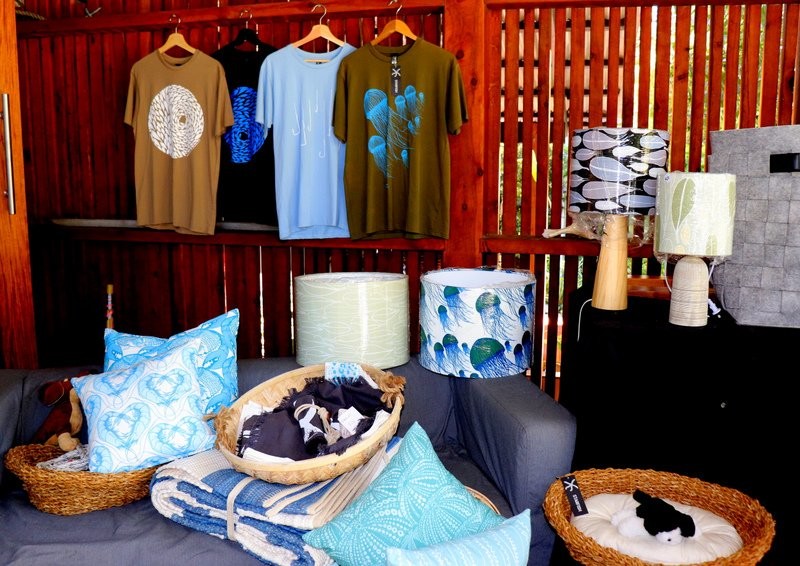 On selected Sunday mornings, browse the Point Lookout Markets beside the Bowls Club on Dickson Way, Point Lookout. There are several shops to check out in Mulumba (Point Lookout).  Noreen’s Seaside Shop has a great collection of relaxed island wear that you’ll also enjoy wearing during the hot summer months.  I saw many tempting things here.

Look out for Starfish Studio. The original prints at Starfish Studio have been turned into a wide range of homewares by owner/designer Jess.  Who would have thought that Stradbroke Island would be a great place to shop when you are looking for a casual beach look?

Perhaps my favourite spot is Linen Caravan.  This shop is filled with goodies you will want to bring home. 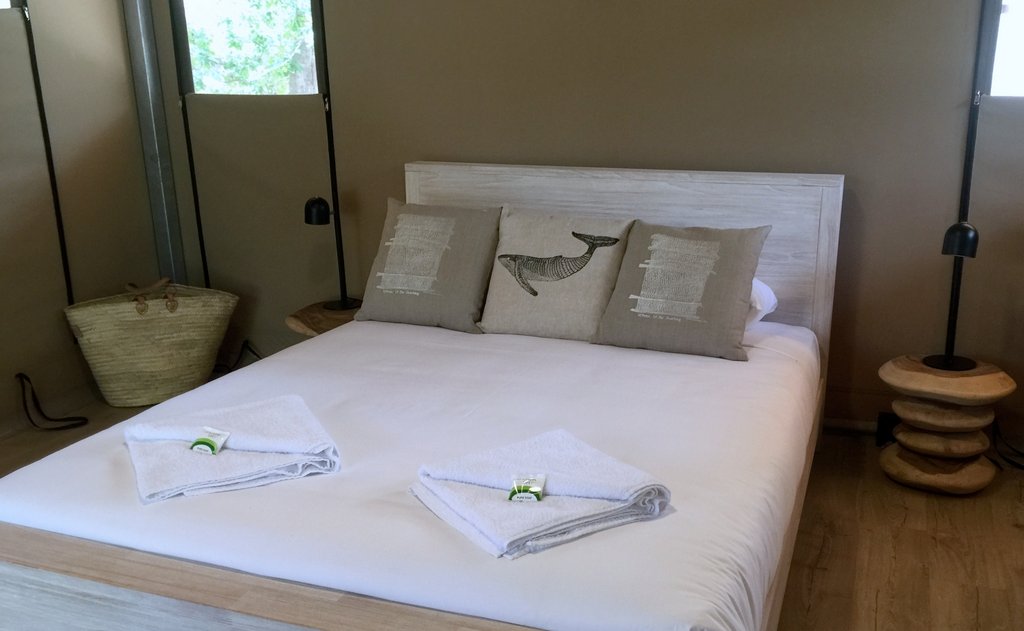 On my last trip to Stradbroke, I glamped at Bradbury’s Beach where tents are right near the edge of the calm surf beach. Mindjerribah Camping on Stradbroke Island has tents decorated with designer flair that include small kitchens. Some even have televisions and air conditioning. It’s my sort of glamping.

If you are booking accommodation, my tip is to book direct, rather than through an agency, where you may be slugged with a $25 booking fee. When I talked to the receptionist at Allure Stradbroke Resort, I realised how much better off I would have been booking direct, and I could have chosen a beach shack with a koala in a tree right outside the deck – how cool would that be?

You also could try a stay at Whale Watch Resort, Samarinda Drive, Point Lookout and walk down to the beach for a swim, up to the Point for fish and chips or a drink at the Surf Club anytime. 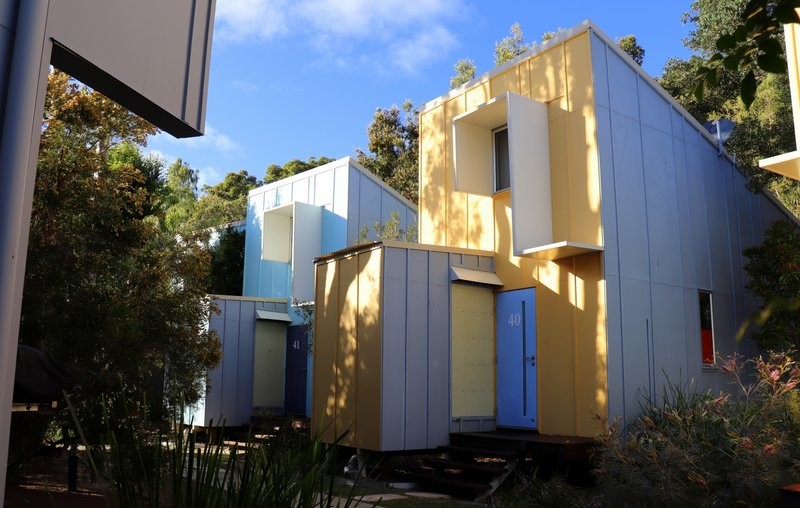 How to get there

There are several ways to get to the island. If you want to take your car, try  Stradbroke Ferries (Vehicle Ferry/Water Taxi), which leaves from Toondah Harbour, Cleveland. Travelling on foot? The Straddie Flyer / Gold Cats (Water Taxi) is a good option. 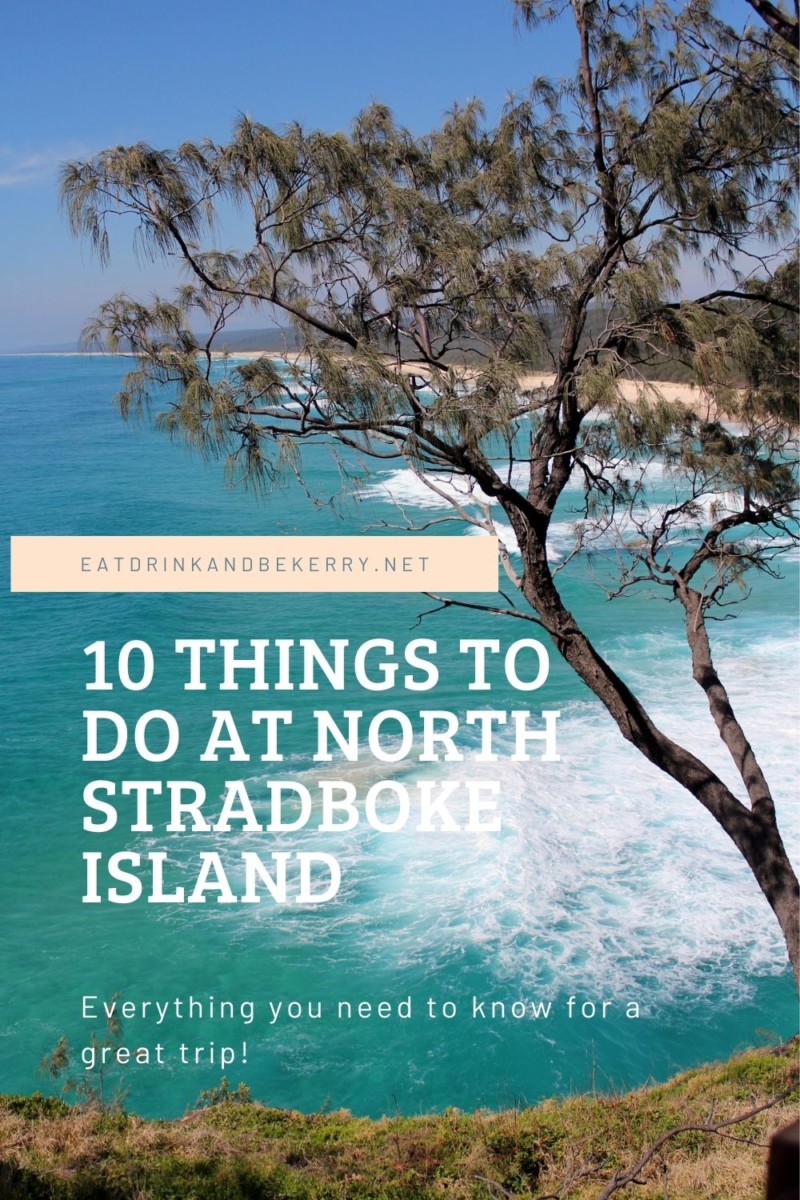 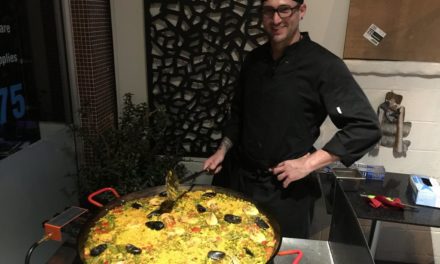 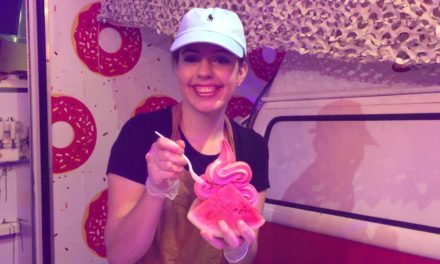 Pushing the dessert frontier with flavour 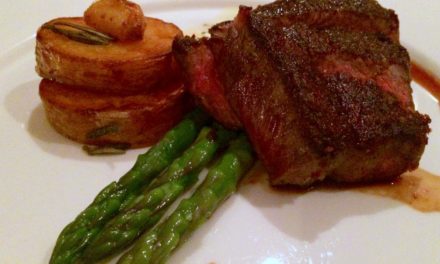 Find the best steak in Brisbane 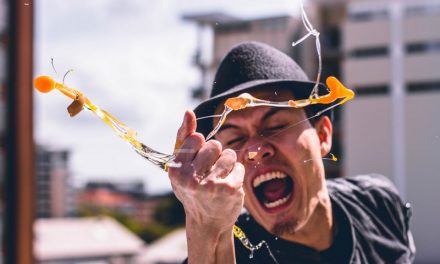 This chef’s table will mess with your mind