Who is watching who is the question I’m asking myself as a young whale gives us a unique Hervey Bay whale watching experience.  The pros call this a ‘mugging’.  This young male and his mate were keen to check out the boat,  and one whale swam around us popping his head up to check us out.  This is just what you can expect to enjoy at the world’s first Whale Heritage Site.

Our whale watching cruise with Hervey Bay Whale Watch started by heading north from Kingfisher Bay Resort on K’gari (Fraser Island) for 30 minutes to Moon Point and Platypus Bay on the eastern side of K’gari, where the whales play. The first whale pops up while we are cruising along. It makes three quick appearances, but the captain says we are heading off. He doesn’t want to put any pressure on a whale where the waters are shallow and there are plenty of sandbanks. Yesterday, this same whale was breaching in the bay.

Finding where the whales play

The boat keeps cruising north to find more whales. It’s early morning on a winter’s day and this is the cold part of the trip, and I wish I had a thick puffer jacket. My spray jacket just isn’t cutting it.  The captain says you can’t spot whales on the radar, so he wants plenty of eyes on the water to help find them.  We are on the front of the boat looking out on the water, trying to find a little sun on our backs. 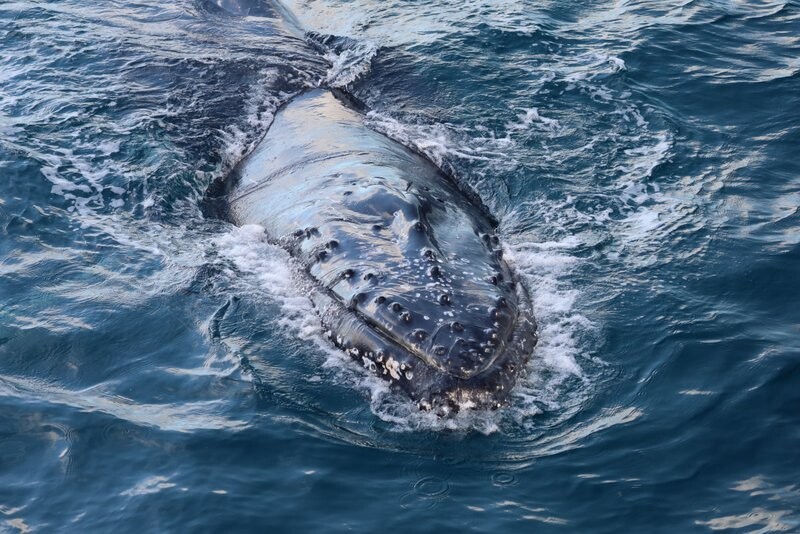 How do you spot a whale?

Spot a whale, and the captain will cruise over for a look. We want to find a ‘mugger’, says the captain. One that is curious and hangs around.To help passengers find the whales, the captain gave us a few tips –

We see plenty of whales in the distance. They seem to like a small yacht and one does a spy hop to check it out better. That’s when their head comes right out of the water to check you out. Then we are running from one side of the boat to the other as this young whale circles the boat. The crew laugh and call this whale watching aerobics! I can see him under the water with his white belly and tail. He’s really looking at us and brings his head close to the boat, and I can see all the barnacles on his skin.

Another whale comes over for a look, and they both start circling the boat popping up for a look now and then. They are so close to the boat that the passengers are calling and whistling. It’s a magic moment that I won’t forget. The swimmers quickly hop into the water, snorkels on, ready for a close-up encounter. However, the whales have other things on their mind and take off to the west.

All too soon, and we are heading back to Kingfisher Bay. It’s been four hours on the water, but it feels like one because we’ve been so busy looking for whales. This is one of the best trips I have enjoyed in Hervey Bay. The whales seem so relaxed in the calm waters, and they are just chilling and having fun. 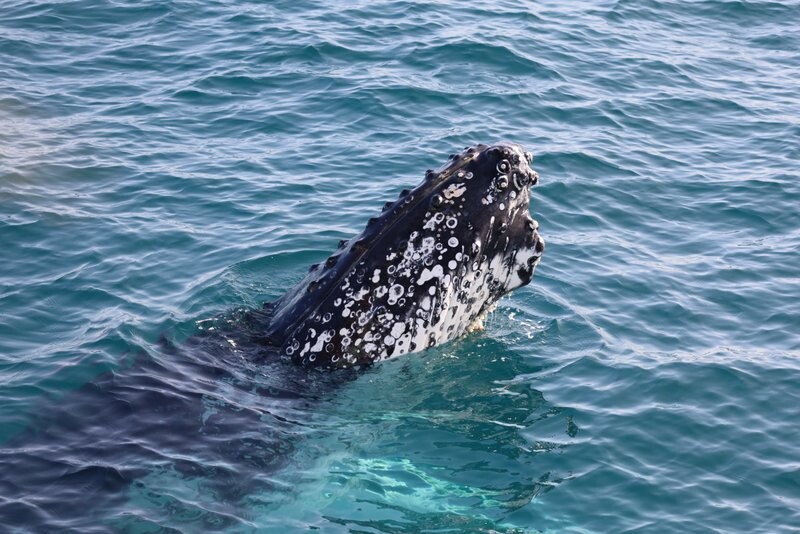 Hervey Bay in Queensland is where the whales stop and play on their route north. It was announced as the first Whale Heritage Site in the world in October 2019, declared by the World Cetacean Alliance at its international conference in Hervey Bay. A Whale Heritage Site has to show active engagement by their communities and tourists with marine life through art, music, science, education and celebratory events while simultaneously recognising the culture and heritage surrounding cetaceans in the local habitat. 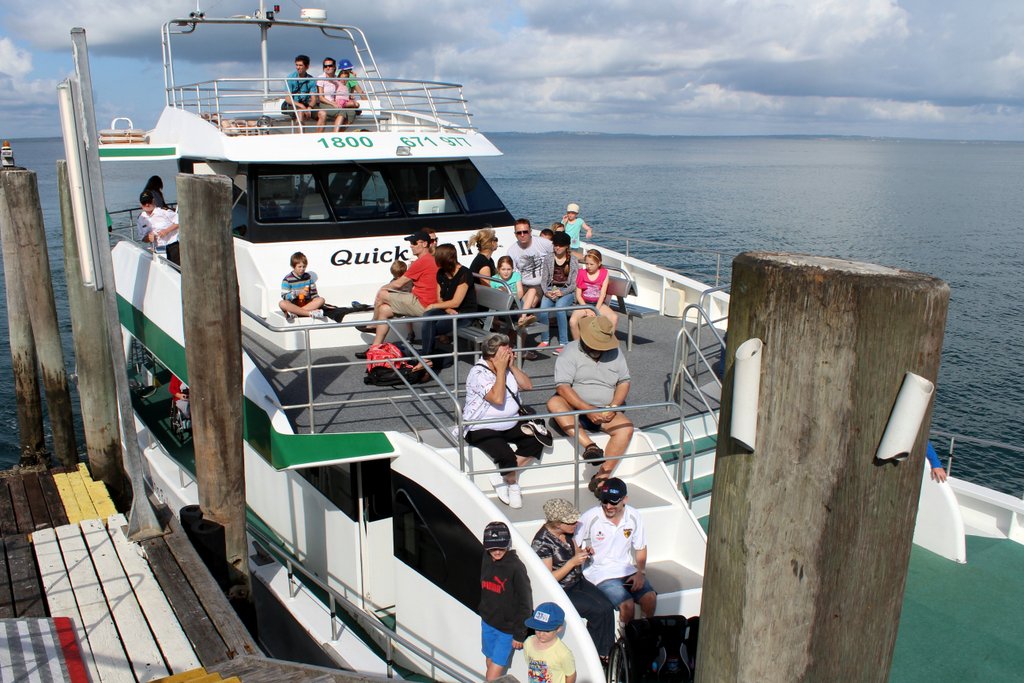 World Whale Heritage Hervey Bay is a top whale watching destination in Australia, not only for tourists but also for researchers who have revealed some quirky facts about the giant mammals. Did you know humpbacks may sleep with one eye open, can stop blood flow to certain parts of their body, that sound is a more dominant sense than sight and that survival and gravity play a part in them growing to the size of a bus?

My previous Hervey Bay whale watching tour was in September when the whales have birthed their calves. Captain Phil told the 50 or so people aboard that the tip of the island is where we will see the whales, and he is right. Our first mother and calf were a little shy at first, keeping the boat at a good distance but I could clearly see the much smaller calf swimming strongly beside its mother. 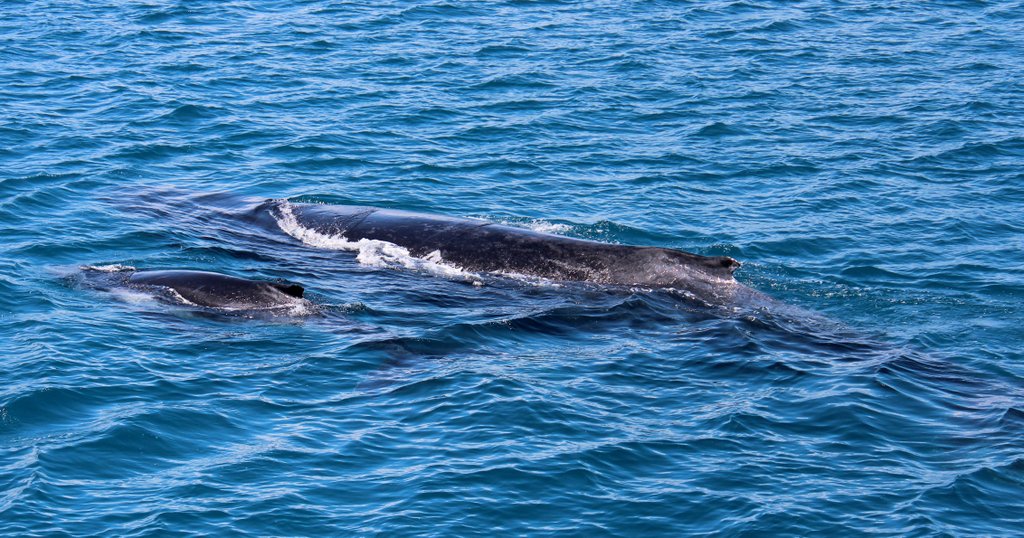 What are whale footprints?

I’m fascinated by the large circles of calm water that float past us, and Phil tells us these are whale footprints. “They break the water tension when they flick their tails to swim down resulting in the clear circles on the water,” Phil says. Sailors used whale footprints to track whales back in the bad old days when whales were valued more for their blubber than their beauty.

Our next mother and calf are a little more playful, and the little one flaps his flippers in the air as he rolls onto his back. He might just have finished feeding on some of the litres of milk the mother whale produces and releases a day. The baby filters the fat-laden milk, which has the consistency of yoghurt, from the water. 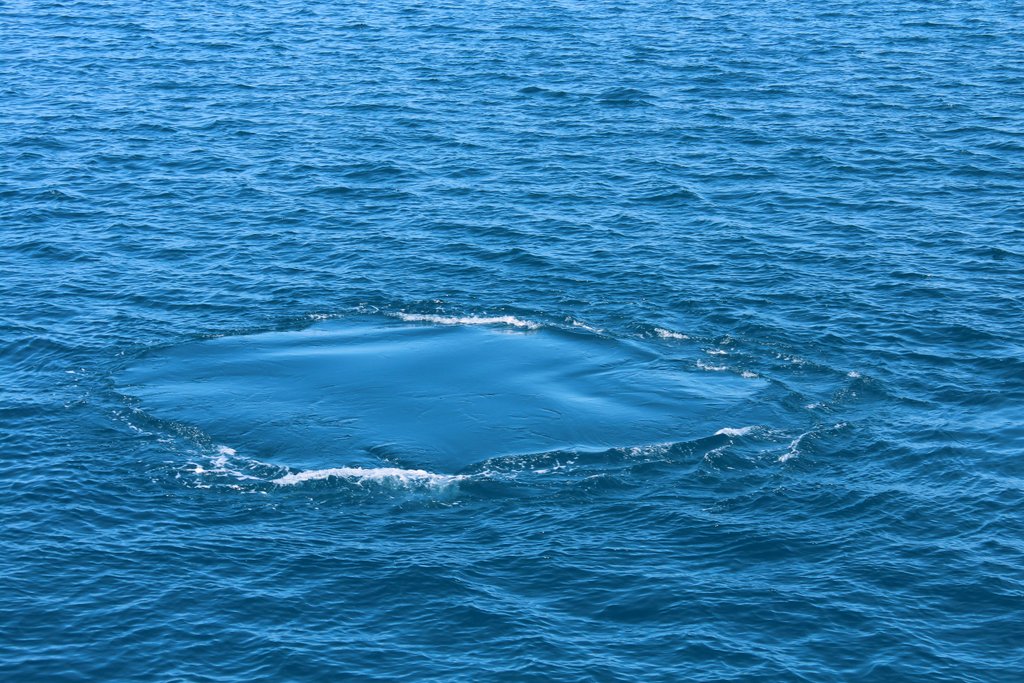 Experts say that whales’ brains are much larger and more complex than humans, and sound is a more dominant sense for them than sight. Whales can make sounds at frequencies higher and lower than humans can hear and could also emit incredibly loud sounds – equivalent to a rock concert! Whales have ears but not an external ear structure, just tiny openings which are difficult to see. Heavy wax inside the ear canal keeps water out, and researchers can count dark and light rings in this ear wax plug, like a tree trunk, to estimate how old a whale was when it died.  I’m glad my job does not involve counting the rings in whale ear wax, 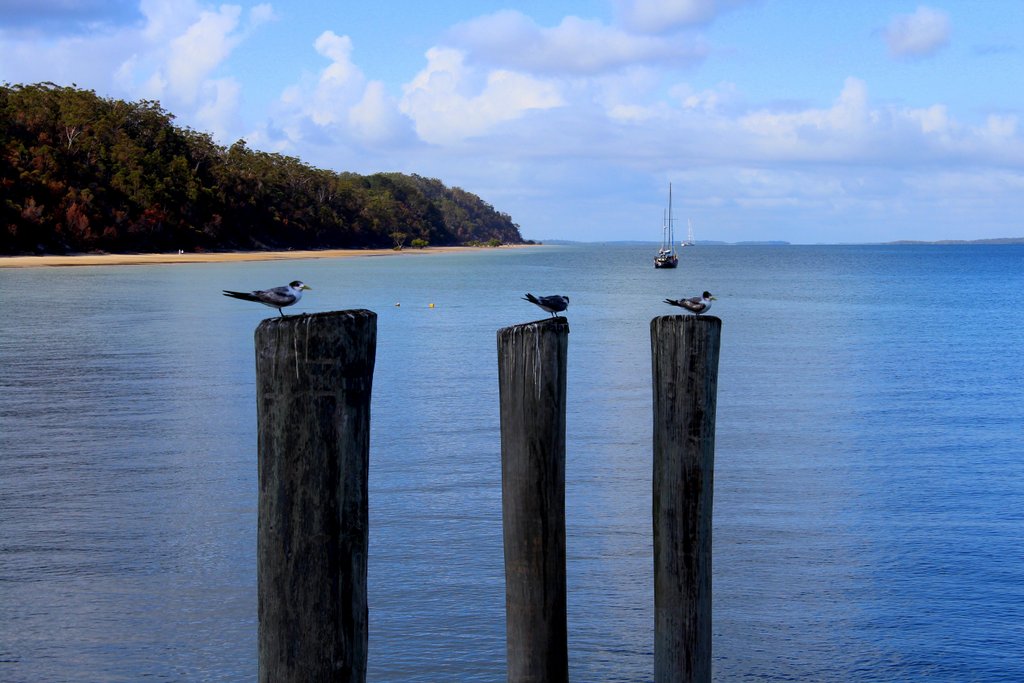 The Whale Heritage Site at Hervey Bay is a whale nursery

The waters around Fraser Island are known as a whale nursery where mothers birth and build up their babies for the long swim back to summer in Antarctica. Humpback whales like to holiday around Fraser Island and Hervey Bay from August to October. Experts estimate around 4,000 humpbacks spend anywhere from a day to a couple of weeks sheltered in the waters, taking time out from their migration. 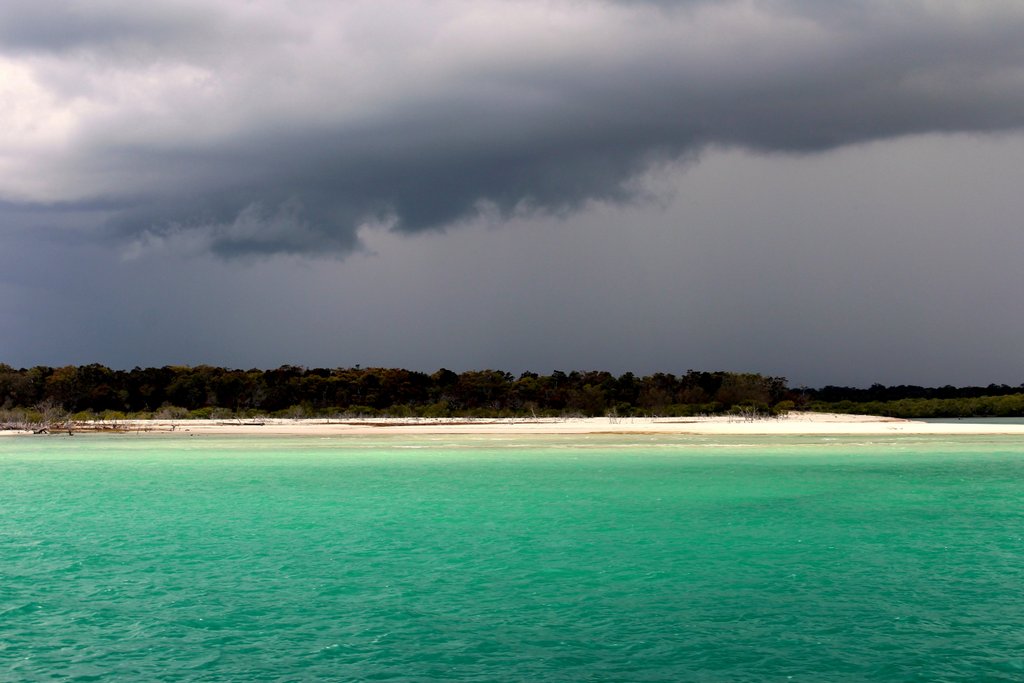 Hervey Bay in Queensland’s southeast is about a 3.5-hour drive or 35-minute flight from Brisbane and a 90-minute direct flight from Sydney. The broad sweep of the World Whale Heritage Site in Hervey Bay is protected from ocean swells by the 123km length of Fraser Island, the world’s largest sand island, forming a naturally calm playground for the whales.

For the second trip, we left the jetty at Fraser Island around 7.45 am and returned at around 1 pm, a little later than planned. Cloudy skies and the threat of rain made for some dramatic scenery on the way home. We didn’t see any tail slapping or breaching behaviour, but I probably wouldn’t be doing that if I had a three-week-old baby.  Friends who went out the next day saw a group of young males making plenty of splashes.  It was a great day out on the water.

Late July and August are the best times to swim with the humpbacks in Hervey Bay, but the whale watching season continues until early November. You can also see Fraser Island from the air with a Fraser Island joy flight or enjoy a walk through Pile Valley on Fraser Island.

If you are in Brisbane, try whale watching in Moreton Bay.

Disclaimer: Ed+bK was a guest of Kingfisher Bay Resort 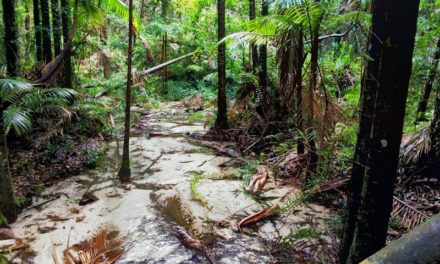 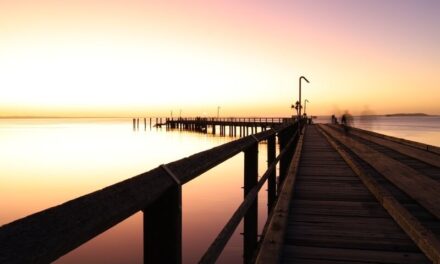 Must do things to do at Kingfisher Bay 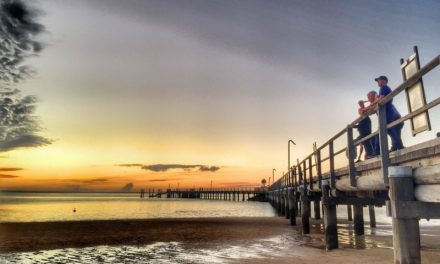 10 secret things to do on Fraser Island 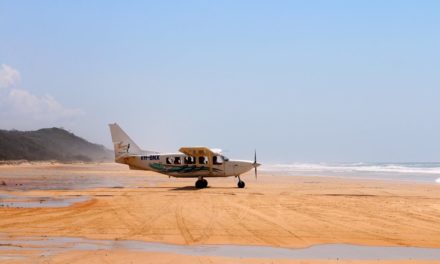 See Fraser Island from the air